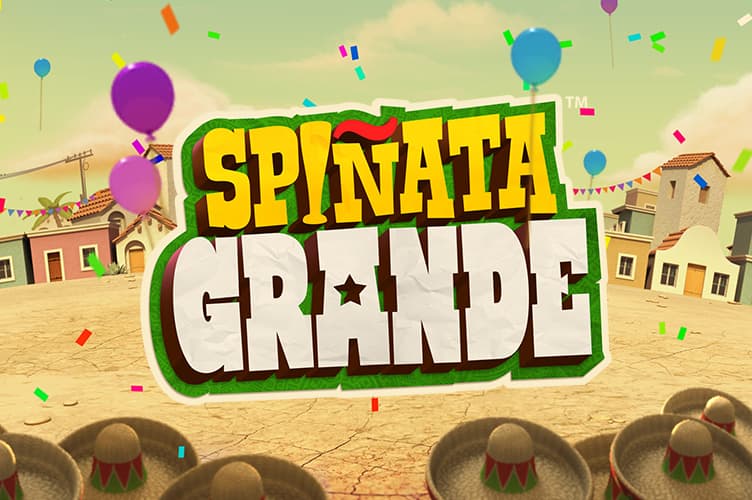 In this Spinata Grande casino review, you will find out about what the Spinata Grande video slot is, what year of its release is, and what features it has.

This is a Mexican-styled game about piñata (which is known farther than in just Mexico), which has authentic yet modern sound and visual design. It was released in March 2015, available on desktop and mobile devices of all modern operating systems. If you’ve ever played with piñata, you will love the process of beating it here.

Imagine some small Mexican village with decently looking houses, clean streets, and lots of sun, everywhere. Here and there, you can see cactuses and palms growing. People wearing national Mexican clothes are walking down the streets for their business, and the cloudless general image of sandy streets and sandy walls of one-story houses is all around. Add here the calmness of siesta – and you will have a close understanding of what Spinata Grande is in ambiance.

This 3D slot creates the feeling of relaxation, fun, and sunny holiday – you will be highly enjoying its relaxing motifs!

The sounds completely underline the spirit of the holiday, which piñata is called to create. The regular procedure of spinning reels in Spinata Grande slots occurs with the background of light Mexican guitar music. When winnings occur, the hailing outcry of a guitarist is heard, with a few fast-paced string accords done, obviously, by his fingers. When the big win is formed, then there are pipes, which play festive music, and the entire short-lived concert (played by several musicians) is arranged to underline the luck.

The graphic is not heavy, light-minded, and saturated with the fun of siesta. It does have a lot of moving elements, though, but the absence of high detailing makes the Spinata Grande online game supportable on devices that are not very powerful.

How To Play Spinata Grande 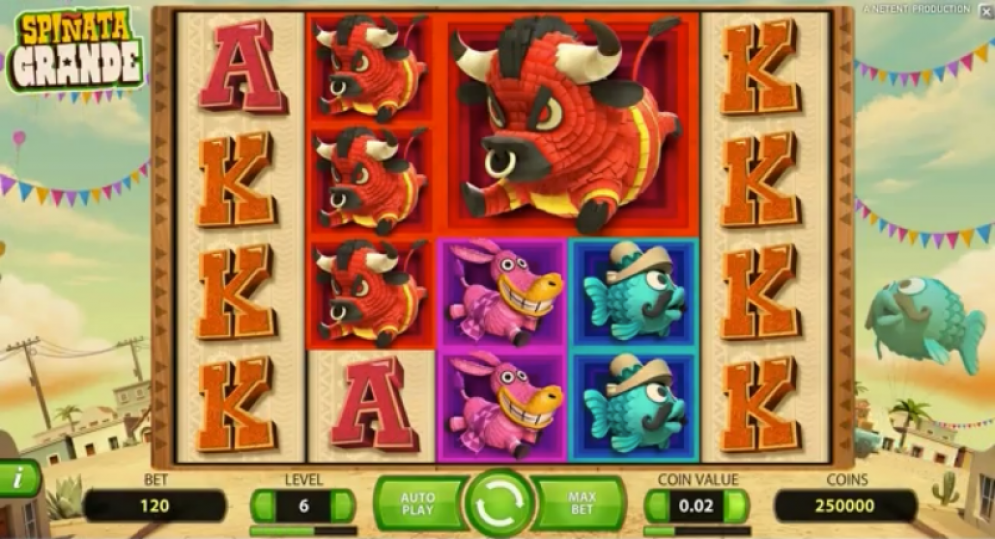 In addition to the main gaming area, the gamer of Spinata Grande sees such interface parts and controls:

When you see an item that is as big as 9 cells and it is a Scatter, there is a bat that kicks it the same as it would hit piñata and hatches the coins and other treasures out of it (forming a big win). The Piñata symbol is a Mexican-looking ‘one-handed bandit’ in a hat with a large black mustache and star-shaped symbols on its belly.

Free spins are initiated when at least 3 scatters are formed as a result of breaking the piñata – they look like a 5-edge star. The more of them are given, the more free spins are counted (starting with 5 FS). Along with free spins, a big win amount is also calculated and given to an account.

During the free spins round in the Spinata Grande game, it is possible to receive another round of free spins – there is no logical limiter in the game established (obviously, to make it more fun). In this mode inside the free-spin mode, each appearing scatter gives 1 extra free spin. The total number of free spins is shown under the main gaming area.

When a symbol of Skull is shown, it also takes 9 cells, the same as piñata, but the mechanics of its work is different: there is no bat to break it and it simply gives out a big win or mega win.

Thanks to the modernity of the game, it is possible to launch and play it on mobile devices, on-table computers, laptops, and tablets. The screen-adjusting graphics work smoothly and reliably.

Spinata Grande review makes this game look highly entertaining & bringing a nice mood (or raising it significantly if you didn’t have a good one prior to starting a game). It has many gaming features, which make the game likable and desirable. Well, as always in recent years, NetEnt has made an excellent game to enjoy!